A deadman control is a safety feature found on many types of machinery and equipment, from trains to lawn mowers.  Originally developed for locomotives in the 1800s, the deadman switch required the engineer to keep his hand on the switch to keep the train moving.

If the engineer removed his hand from the switch, the train came to a stop. The deadman switch meant the train wouldn’t run out of control should something happen to the engineer.

Deadman switches for blast machines use the same principle.

The remote control, which is commonly referred to as a “deadman,” is connected to and controls the valves on the blast machine. The deadman provides direct cut-off of abrasive and air to the blast hose in the event the operator loses control of the hose.

Restart is accomplished by closing the switch. This closes the exhaust valve and opens the inlet valve – restoring pressure to the tank. Blasting will stop or start within 1/2 – 3 seconds of switch activation in either mode depending upon tank volume and distance from the machine to the deadman.

The Pressure Release Control system should be considered when work stoppage occurs infrequently or when machine filling is done using a hopper, such as with a blast room or large outdoor hopper.

Releasing the control-activating switch (deadman) simultaneously closes both the abrasive regulator and air inlet valves, stopping media and air flow – holding the tank under pressure and ready for immediate start.

Figure 2 shows a Titan U600 Blast Machine with Pressure-Hold remote control. Note the air inlet valve and abrasive regulator located at the bottom of the machine. 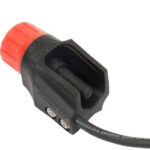 These blast machines can be used with either the pneumatic deadman switch or an electric one (Figure 3).

Because of the pressure retention, start-up is much faster and air usage is conserved. Restart requires only activation of the deadman control switch, which causes the abrasive valve to open simultaneously with the inlet air valve. The tank must be manually discharged for refilling.

The Pressure-Hold Remote Control system is recommended for situations where frequent starts/stops will occur.

As CEO of Titan Abrasive, Brandon Acker oversees the design and manufacture of the company’s complete line of blast room / blast machine products for industrial applications.

Need a replacement part? We've got you covered